This is the latest installment of a regular feature on the Peace Stories blog featuring the stories of our 120 member organisations on five continents around the world. For May 2017, we’re getting to know the Denis Hurley Peace Institute, one of our member organisations in South Africa. This interview was conducted by email with Director Danisa Khumalo and Jeanette Lesisa.

South Africa (SA), for historical reasons, commanded world attention for decades. The word that best describes this attention is the word ‘Apartheid’, a form of constitutionalised racism. It united socialist and capitalist countries against it; it brought about a unity of purpose between rich and poor, East and West, in their opposition to it.

Rather than being an ugly aberration, South Africa was really an extreme parable of an entire global system. This bleeding land was and is a microcosm of the oppressive dynamics which now govern the world order.

When, why and how did the Denis Hurley Peace Institute start?

Denis Hurley Peace Institute (DHPI): Since the democratic transition in 1994, the Southern African Catholic Bishops’ Conference (SACBC) has received numerous requests for assistance in the area of conflict management from the Catholic Church across the African continent. South Africa owes a huge debt to its African neighbours for the support they gave to the country during the dark days of Apartheid. The Bishops felt the need to repay that debt by responding as best they could to the requests they received.

Bishop Kevin Dowling of Rustenburg Diocese, working with the then Coordinator of the Justice & Peace Department, Mr. Neville Gabriel, were mandated to propose how this Peace Institute would come into being. Numerous consultations took place across a wide section of South African society, and indeed beyond the borders, and the final result was the establishment of the Denis Hurley Peace Institute in October 2004. Archbishop Denis Hurley, a legend in the struggle against Apartheid, had passed away the year before and so it made every sense to call the new Peace Institute after him.

Was there some particular event or issue that served to bring the Institute into being?

DHPI: South Africans did not stand alone in their struggle against Apartheid; the world stood with them and not least their African neighbours who received, sheltered, educated and helped train thousands of young South Africans to return home and take up the fight.

This was done at enormous cost to their own countries that paid a heavy price for this solidarity and support. It is a scandal that the Truth and Reconciliation Commission (1996 to 1999) did not investigate gross human rights violations in neighbouring African countries that bore the brunt of the vicious South African regime’s capacity to strike back with impunity on foreign soil. Somehow those innocent people killed for offering a safe haven to so many South Africans, did not seem to count. 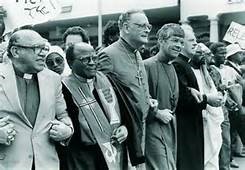 It is important to clearly state that the work being carried out by the DHPI is the work of the SACBC, as DHPI is an Associate Body of the SACBC. The Bishops from the SACBC have made numerous solidarity visits to various countries such as Sudan, DRC, Zimbabwe, South Sudan, Ethiopia, Burundi, Uganda, Swaziland and Lesotho, that have been hugely appreciated in particular by the local Church and in general by the local population.

It is further important to point out that DHPI work takes place outside of South Africa, in various countries scourged by war and conflict. However, DHPI does have a close working relationship with both the Justice & Peace Department of the SACBC and the Catholic Parliamentary Liaison Office (CPLO) which is also an Associate Body of the SACBC.

What is the structure and who are the people involved in the Institute? Who are the main leaders or personalities behind the work?

DHPI: DHPI basically functions with four different structures: The Board, the Staff, the Associates, the Consultants and the Contact People.

The Board was constituted by the SACBC because DHPI is an associate body of the SACBC but has its own Board of Governors. The Board is constituted by less than 10 members of which three ex-officio members, a Bishop, the SACBC Secretary General and a priest, the CPLO Director.  In addition there is the DHPI Director, another priest with Justice & Peace experience, and the rest of the members are people with various expertise and experience such as project management and financial management.  The Board serve for a minimum of three years and a maximum of six years and meets twice a year.

The Staff of DHPI has expressly kept the staffing to a minimum because most of its work is done outside the country though the office is based in SA. The staff is constituted of a Director, an Office Administrator and a Financial Manager. DHPI is in a process of getting M&E personnel.

The Consultants are people (some Bishops and priests from SA) that the DHPI call on a regular basis to assist in our work in various countries. Most have a particular skill such as legal (lawyers) versed in the issue of constitution writing; some have experience in election monitoring, others in conflict management while others are called upon to share the South African experience.

Internal Partners are mostly local organisations that DHPI has developed a very close working relation with, like the Department of International Relations and Cooperation (DIRCO).  DHPI is also closely associated with NGO’s in South Africa who share the same concerns and sentiments on peace building and who monitor what is going on in the same countries as DHPI does. These also include the Institute of Security Studies (ISS), Southern African Liaison Office (SALO) and Crisis Action among others. At times DHPI attend their seminars organised by these internal partners on topics pertaining to the countries DHPI works in and at times we are invited as guest speakers at their conferences and dialogues.

External Partners consist of the Catholic Commissions for Justice & Peace (CCJP) in various countries as well as funding partners from international community who supports the work of DHPI in the countries DHPI works.

What are the current issues you are working on, or what are your major priorities?

DHPI: The Institute is very much concerned with the current issues that are affecting various countries in Africa. DHPI is current working on capacity building in peace building, conflict management, leadership skills, trauma healing and counseling, constitutionalism, electoral processes, advocacy and through its intervention DHPI also promotes the Catholic Social Teachings (CST).

How is the Institute putting nonviolence into practice? What role does nonviolence play in your work?

DHPI: Nonviolence approaches are the essential message of the work of DHPI. All our interventions are shaped by nonviolent philosophy and approach. Peace is seen as something more than the absence of war or overt violence. DHPI in its work champions nonviolent ways of building peace. Approaches such as conflict management, mediation, advocacy for peace, using eminent persons as envoys for peace and giving negotiation a chance are nonviolence approaches that DHPI work with and encourages other communities to adopt. As a South African organization, we have learnt that violence begets violence and it should never be encouraged. Nonviolence is seen as an important tool to disarm others and to bring them to a point of talking without carrying weapons.

The manuals that we use and one that we developed on leadership cements the nonviolence approach to dealing with conflict.

What is the greatest accomplishment of the Institute during its history?

Is there any particular story about the Institute that stands out for you?

DHPI: In September 2015, DHPI facilitated a solidarity visit by the leaders of the Catholic Church to Lesotho. During this visit, our host conference expressed the sadness of living in a troubled state where the army and police were supporting individual politicians and not protecting the people. During the visit, our leaders listened to what leaders from the opposite political parties had to say. They also listened to the relatives of the slain former commander of the Lesotho Defence Forces, Lt. General Mahao. They met and prayed with the wives of 23 detained soldiers who were being charged of mutiny. Their cases (of the arrested soldiers) were so serious that if found guilty, their sentence would have been death.

The Bishops decided to go into the maximum prison to visit the detained soldiers. The Bishops spoke words of consolation to men (soldiers) who were facing an uncertain future. The Bishops expressed their solidarity and the solidarity of the Catholic Church in South Africa including people of goodwill. I saw some tears from some soldiers and some of the Church leaders. This was solidarity lived in reality. I saw a face of a concerned Church. A visit to the king was also undertaken and concerns were raised by the Church leaders. The relationship of solidarity has continued to date. The challenges of Lesotho are many but the care and solidarity is still alive.

Any story that is particularly meaningful to you?

As some African countries lack peace, he saw enough room for the co-operation of Church and his foundation in working towards peace. He also underlined the concept of Africans working to solve their own problems. That for us in Denis Hurley of appreciation that our work is still acknowledged in our Country and leaders like Former President Thabo Mbeki are prepared to work with the Denis Hurley Peace Institute to contribute to peace building.