Several days a week, Laurie Hasbrook arrives at the Voices office here in Chicago. She often takes off her bicycle helmet, unpins her pant leg, settles into an office chair and then leans back to give us an update on family and neighborhood news. Laurie’s two youngest sons are teenagers, and because they are black teenagers in Chicago they are at risk of being assaulted and killed simply for being young black men. Laurie has deep empathy for families trapped in war zones. She also firmly believes in silencing all guns.

Lately, we’ve been learning about the extraordinary determination shown by Ben Salmon, a conscientious objector during World War I who went to prison rather than enlist in the U.S. military. Salmon is buried in an unmarked grave in Mount Carmel Cemetery, on the outskirts of Chicago.

In June, 2017, a small group organized by “Friends of Franz and Ben” gathered at Salmon’s gravesite to commemorate his life.

Mark Scibilla Carver and Jack Gilroy had driven to Chicago from Upstate NY, carrying with them a life size icon bearing an image of Salmon, standing alone in what appeared to be desert sands, wearing a prison-issue uniform that bore his official prison number. Next to the icon was a tall, bare, wooden cross. Rev. Bernie Survil, who organized the vigil at Salmon’s grave, implanted a vigil candle in the ground next to the icon. Salmon’s grand-niece had come from Moab, Utah, to represent the Salmon family. Facing our group, she said that her family deeply admired Salmon’s refusal to cooperate with war. She acknowledged that he had been imprisoned, threatened with execution, sent for a psychiatric evaluation, sentenced to 25 years in prison, a sentence which was eventually commuted, and unable to return to his home in Denver for fear of being killed by antagonists. Charlotte Mates expressed her own determination to try and follow in his footsteps, believing we all have a personal responsibility not to cooperate with wars.

Bernie Survil invited anyone in the circle to step forward with a reflection. Mike Bremer, a carpenter who has spent three months in prison for conscientious objection to nuclear weapons, pulled a folded piece of paper out of his pocket and stepped forward to read from an article by Rev. John Dear, written several years ago, in which Dear notes that Ben Salmon made his brave stance before the world had ever heard of Nelson Mandela, Martin Luther King, or Mohandas Gandhi. There was no Catholic Worker, no Pax Christi, and no War Resisters League to support him. He acted alone, and yet he remains connected to a vast network of people who recognize his courage and will continue telling his story to future generations…

Click here to read the rest of this article.

As November comes around again, we in Pax Christi Aotearoa-New Zealand turn our thoughts to what we will do this Parihaka Day, 5 November. Last year, we promoted a new film, “Tatarakihi – the children of Parihaka”. The year before, we held a seminar to catch up with the latest developments in the process of trying to get this day and the events it commemorates onto the national calendar.

What is Parihaka all about? What has it to do with peace-making, here in Aotearoa but also, internationally?

On 5 November 1881, 1600 fully-armed troops and cavalry assembled outside the village of Parihaka which lies under the shadow of Mount Taranaki. They were hoping for a battle and another chance to show the Taranaki region Maori who was master, to put an end to their resistance to the confiscations of land which had being going on for the past 20 and more years.

They were particularly keen to put an end to the careers of two prophetic leaders, Te Whiti o Rongomai and Tohu Kakahi. These two had established the village on land seized by the government following a series of land wars during the 1860s. The village thrived, expanding to more than 2000 inhabitants who impressed nearby settlers with their industry and the quality of their products. They also inspired a high level of covetousness as more European settlers arrived looking for land on which to set up their own farms and settlements. 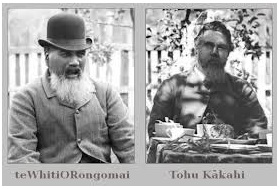 The government increased their efforts to claim these confiscated lands and began to survey it and threaten force in the face of growing resistance based on Parihaka. But as the land near the township was surveyed and offered for sale, Te Whiti and Tohu began the series of non-violent actions for which they have become famous. They first of all removed the survey pegs and ploughed across the lines of new roads. Next they put up their own fences where roads and farm boundaries were supposed to be, thoroughly disrupting the process of division and sale by showing that they believed they still had rights to the land which had been unjustly confiscated.

This led to the arrest of eventually more than 400 men. As each small group of ploughmen was arrested, none of them resisted but allowed themselves to be taken and transported around the country, some to the cold areas of the South Island, 1000 miles from their homes. But as one lot was arrested, transported and held without trial, another came and continued their work.

The non-violence of Te Whiti and Tohu’s resistance was lost upon the settlers and their government and rumours spread about a violent uprising, in spite of clear evidence to the contrary. In October 1881, Native Minister, James Bryce, assembled his troops while the head of state, who had resisted the use of force, was out of the country. They entered the village at dawn on 5 November but instead of armed resistance, they met children skipping up to them and offering them food. The irony of this was ignored by Bryce and his men who arrested Te Whiti and Tohu, committing them without trial to 16 months jail. 1600 of the inhabitants of the village were dispersed around the surrounding countryside without food or shelter and the remainder were put under heavy bond restrictions. In the course of this destruction, soldiers looted and burned the village, abusing and raping women, leaving some infected with syphilis. Subsequently, with resistance quelled, the land was divided and sold and even land to which Maori had clear rights was taken to defray the costs of the invasion of their village.

Although the government did its best to keep its actions out of sight, reporters were in the village and soon filed reports of the invasion which spread around the world. It is believed that the story came to the attention of Mahatma Gandhi, either through reports in colonial newspapers or at his meeting an Irish delegation who had visited Parihaka.

The leaders of the village were released in 1883 and Te Whiti and Tohu returned with some of their followers but they were continually harassed by soldiers and settlers and never allowed to fully revive their community. Both eventually died in 1907 but their legacy of non-violent resistance remained and has gradually been seen as an influence on the use of such means in other parts of the world, so much so that in 2003, an international delegation representing Mahatma Gandhi and Martin Luther King visited Parihaka to honour its founders as “fathers of non-violent action”.

Pax Christi has joined a growing minority who are trying to put Parihaka and its celebration of non-violent resistance in its proper place of honour. So, as November comes around, we turn our minds again to find some way in which we can promote the memory of these two prophetic heroes who tried to integrate their own traditional spirituality with the stories of resistance in the Christian scriptures which they knew well. In doing so, they developed a practice of non-violent resistance which is part of a world-wide movement reaching into our own time. We are working to see that they are given full recognition in this their own land among other such leaders, both international and indigenous, who have sought the path of reconciliation and the non-violent resolution of conflict in the spirit of the peace of Christ.