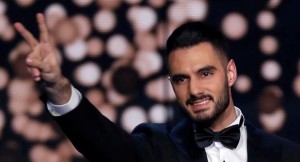 On Saturday, March 4th, Ya’coub Shaheen was cheerfully welcomed in Bethlehem and Ramallah. After his performance in Arab Idol in Beirut, he shook not only the hands of VIPs but visited and performed in several Palestinian refugee camps near Beirut, together with his co-contestant Amir Dandan from Majd al-Krum in the Galilee. The people in the camps always long to see people coming from Palestine, we hear. And like a week ago it was again a festival in the streets in Bethlehem with Syriac-Orthodox and Palestinian flags and Ya’coub on people’s shoulders. People took a break from the usually depressive news of the moment. (For instance, in the month of February 2017, 420 Palestinians were detained by the forces of the Israeli occupation).

Large banners with the image of Ya’coub decorated apartment blocks. Businesses took care of him. Many local companies covered the 3,5 shekels (almost a Euro) which each SMS vote costed. Many millions of votes seemed to have been cast for him. Christian and Muslim votes came from Palestine – but also from Muslim cities, like Hebron, where he studied – and from throughout the Arab world, Arab communities across the world.

It is a fact that where Palestinian politics does not succeed to unify Palestinians, Ya’coub succeeded. At Idols he gave voice to a range of identities. ..

Click here to read the rest of this story.