Note: The following story was submitted to the Nonviolence and Just Peace conference in Rome in April 2016. Conference participants were invited to share short reflections on their own experiences of nonviolence and peacemaking. 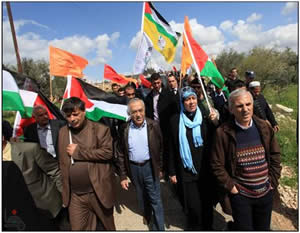 It may not be an exaggeration to say that there is no greater challenge to issues of nonviolent resistance other than that of the Palestine/Israel context. The framework of this conflict is one of injustice, violence and a struggle for freedom. As it was in Biblical times, the Palestinian reality is one of oppression, the abuse of religion, distortion of history and appropriation of culture. On top, the fierce regional and international geo-political interests have plagued the country for centuries.

The situation for Palestinians today is further exacerbated with the recent rise in local and regional extremism and violence and the absence of any perspective of peace and reconciliation. Most importantly the Palestinian context suffers longstanding Israeli policies to dispossess and expel Palestinians and push them constantly towards despair.

In spite of the above, the Palestinian struggle evolved towards compromise and acceptance of Israel since 1988, when Palestinians agreed to establish a state on 22% of their homeland, i.e. in the territories Israel occupied in 1967. Though Palestinian resistance over decades did feature bouts of violence, it was mainly a long history, and it still is, of nonviolence, a history well described in the book of the human right activist/scientist Mazen Qumsiyeh entitled Sharing the Land of Canaan – Popular Resistance in Palestine.

The lessons of history taught us how violence is an obstacle to peace regardless of the reasons. It is an aberration to human nature and is a result of anger, endless suffering and the incapacity to manage violence. But Palestinians suffer the double injustice where in addition to Israel’s occupation and injustice Palestinians suffer the brunt of guilt of the western world toward the Jews due to centuries of oppression.

As elsewhere in the world, the challenge of nonviolent resistance in Palestine faces two main challenges: First, how to succeed a popular resistance that calls attention to injustice and second, how to successfully empower individuals to learn to live in respect of the other, including the aggressor, and with our fragile environment. This is proving to be a daunting task, especially in a world dominated by the power of might and greed…

Click here to read the rest of this paper.