A series of Pax Christi International Board meetings coincided with the Sarajevo Peace Event in June. Pax Christi International board members, leadership from member sections – and I, one very fortunate volunteer – had the incredible opportunity to experience the city of Sarajevo one century after its cataclysmic events of 1914 took place. Mortar-scarred buildings and pensive eyes bore witness to Sarajevo’s tortured journey through the Bosnian War less than two decades prior. During this conflict, the besieged city was torn asunder many times over; still, there is healing.

The peace event provided a rich experience with Sarajevo’s history and culture. I also had the opportunity to meet many members of the international peace movement. However, it was upon my return from Sarajevo that I heard the most moving calls for peace: they issued from a quiet cemetery in the Flanders countryside.

I visited the town of Ypres yesterday with three of my colleagues. After leaving the town centre, we arrived at a Commonwealth cemetery. If the Second Battle of Ypres had been the last incidence of chemical warfare, and if the technological trajectory of aerial bombing had not reached nuclear detonation in 1945, the impression placed on me by Tyne Cot Cemetery may have been different. If only nationalism had released rather than strengthened its ugly hold on humanity in the first half of the twentieth century, Tyne Cot Cemetery would have been an eternal monument for peace. But the First World War was not, of course, the war to end all wars. The battles of the Second were fought in close proximity, imbuing the stoic rows of headstones with a tragic sense of futility. Flanders’ innocent antebellum tranquility has been lost forever, and worse, the period following the internment of the Tyne Cot soldiers could soon be called one of interbellum. The memory of subsequent conflicts gave this place – a strange, neat island protruding from the rolling inflection of farmland – a sense of absurdity. The fertile ground is sown with broken, decaying bodies devoid of the Flanders wind’s gentle breath; soldiers, sacrificed for the fallacy that war can end war, have become one with the indiscriminate dust.[1] Standing in Tyne Cot felt like a dream. Did those horrid battles really take place? Worse yet – was war really allowed to happen again before even thirty years had passed?

This reflection certainly does not have the optimistic ring of peace storytelling! But I am not resigned.

We visited the In Flanders Fields Museum, which is housed in the reconstructed Ypres Cloth Hall. In the museum, light from darkened stained glass windows fell across creased brows. Quietly, visitors wandered through the exhibits, mourning for fallen soldiers unknown to them. One exhibit was a map which illustrated the almost imperceptible movement of the trenches over the course of the war. This movement scarred the Belgian countryside and cost immeasurably more in human breath and suffering. It almost instilled a sense of despair in me. That the museum’s presentation of history aroused such feelings, though, was immensely encouraging. Viewed in any context, but especially this one, the propaganda posters hanging on the museum walls seemed ludicrous. The tacit, solemn message of the museum was this: “We failed to prevent this – all of us.” Indeed, what a unifying act remembrance is! When Justice comes with her cool, impartial hand, she gives no regard to the colour of her charges’ uniforms.

At Essex Farm Cemetery, we passed the stony medical station where John McCrae wrote his poem “In Flanders Fields.” As a Canadian, I am almost constitutionally obligated to like this poem, and I do. I have come to interpret McCrae’s torch as something that belongs to all of humanity; it is this torch, shining for all, which peacemakers strive to hold high.

I couldn’t help but feel that humanity had reached some sort of painful adolescence between 1914 and 1918. My immediate thought upon walking into the vastness of Tyne Cot Cemetery was, “What have we done?” Humanity, through a series of mistakes and misplaced ambitions, brought upon itself immense destruction. Sadly, one need only think of the brutal and widespread violence recorded in long-closed chapters of history to realize that the First World War was not the first such collective adolescence. 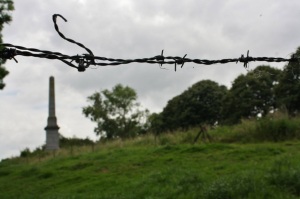 A memorial on the Essex Farm Cemetery grounds. To the left of the frame, the Ypres Canal, which became a battle site in 1940, flows on.

Things change: the Hebrew campaign against the Canaanites, genocidal by modern standards, was carried out long before the intercession of Christ, the Prince of Peace; even the Roman Empire fell in its time. In twenty-first century Flanders, no Mount of Olives is present, but the very ground swells with quiet, humble mourning. The foe is war itself; the quarrel has been taken up. The torch does not flicker. We – in the broadest sense of that word – have not forgotten.

2 responses to “Reflections on a Postwar Pilgrimage”