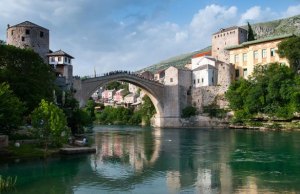 Being educated as a civil engineer, I am quite passionate about bridges. Bridges interest me, not only because of their construction or architecture, but foremost because of their significance to people. No wonder I switched in my professional life from physically constructing bridges to building bridges between people.

In many wars and conflicts, bridges play an important role. In their effort to liberate the Netherlands, the allied forces mistakenly occupied the wrong bridge and suffered seriously losses and delay. The destroyed bridge in Mostar, Bosnia, became the symbol of the divide in the conflict. Rebuilding the bridge after the war was a symbolic act supported by the international community.

During Pentecost, I visited an international peace event in Sarajevo. It brought me back to the town I lived in during war time twenty years ago. This time, I could walk around  the city with a risk to be overrun by trams instead of being shot by a sniper. And I could cross bridges and admire new bridges being built, rather than negotiating at military checkpoints for access to suffering people at either side of the river. The river that divided the city, being the frontline, and the closed bridges became the physical expressions of a violent divide amongst people.

This city of bridges, became the city of breaches, and was my first mission in war and peace. Building bridges between people in Sarajevo was my first peace building challenge. It was a challenge in many different ways. It was a challenge to my emotions, to live with people in war and be confronted with fear, suffering and death. I changed from being a spectator to a conflict, to being involved in the conflict. A mission that started of with a sense of heroism, that changed in my first confrontation with my own vulnerability and at times incapability.

Besides that it was a challenge to my rational, as to understand what this war was all about, what war actually entailed, what people do to each other and how powers -local, national and international- seem to govern at the cost of people, rather than  the well being of people.

In the nineties, there was war in many places in the Balkans, yet the people in Sarajevo could not believe that war would come to them. They were living together with all their different backgrounds, in a culturally and intellectually vibrant city. But war did come as so-called leaders managed to talk fear and hatred into the hearts of so many. The disbelief and anger made people fight for their dignity. Many sought refuge abroad, most could not flee. Some stayed to resist the tyranny of powers and fight for humanity in a non-violent way.

Living in besieged Sarajevo, there were days we could not do much to actually assist the victims of war. But it was especially at those frustrating moments that the people of Sarajevo told me how my presence alone, was an important symbol of solidarity of the international community. How they most feared, being forgotten by other people abroad.

Very often you and I are spectators of wars and conflicts that seem to continue endlessly or flare up again. South Sudan, Libya, Syria or Iraq may cause cynicism on a peaceful world; they should never make us cynical about the people suffering from these conflicts. Even more than us, they can feel they are living in endless violence, but they cannot give up hope. We might sometimes have doubts about what we can contribute to end the violence, we should never doubt the significance of staying connected.

In Sarajevo, the 2014 Pax Christi International’s Peace Award was given to the Syrian Jesuit Refugee Service. They support Syrian people that suffer from the incredible violence as well as the people that refuse to be victimized and continue to call for non-violence. As they said in their acceptance speech, the main message of their continued presence for example in Homs and Allepo is “we will not abandon you. The powers can sometimes be overwhelming and too big and strong to challenge, yet with small actions we can make big differences in peoples lives”.

Being back in Sarajevo, a place of such enormous suffering and strong symbolism, reminded me what the bridges of Sarajevo taught me. Peace building is not about bridges but about the people that cross them. Peace is not about the big acts of heroes, it is about ordinary people that continue to believe in humanity, that peace is possible. The diversity of the Pontifical Choir of Sarajevo, singing at the occasion of the Award, was a touching symbol of hope. People showing the courage to cross their own bridge of fear or anger, which separates them from their neighbor. Do we have that courage?

One response to “Building Bridges and the Challenge of Sarajevo”